Time for a new update, now we've reached 200 followers on the Facebook and Twitter feeds. It’s been just over a month since the last one, when I announced we’d reached our ambitious fundraising goal of $8,500, in order to complete the filming in the United States and Canada. I still can’t thank the people who contributed to the campaign enough. Indebted is putting it mildly.

Already, international flights have been booked, in order to rendezvous with lighting cameraman, Eric Shepherd, in Toronto NEXT MARCH. We’ll begin there, before moving on to Vancouver. Then it’s back to America in LA, San Diego, Colorado, before concluding (with any luck) in Mississippi.

Logistics are underway to arrange for the key cast & crew remaining, to be available for interviews within a 4-week timeframe. Here in England, post production is moving along comfortably. I’m currently sorting through budgets and quotations for what will be an extensive process, but one I’m looking forward to next Summer.

But, as far as the documentary, that’s about it. That however isn’t enough for the first post in a month, so in memory of the recently-departed Ernest Borgnine, who sadly passed away in July, here is a series of tributes from 7 crew members, covering a wide spectrum of the production departments on "AIRWOLF". 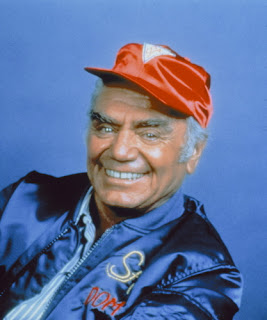 I’d like to add that Ernie (as it seems he was fondly called and referred to) is someone whom I will always be incredibly disappointed that I didn‘t meet, nor interview for the project. Unfortunately, at the time when preparations were in motion for the first shoot last year, certain circumstances prevented us from securing him for what would have been a very specific, memory-challenging interview; one that I’m sure he would of relished, having seen several with him, and learning about his strong, admired-by-many work ethic. 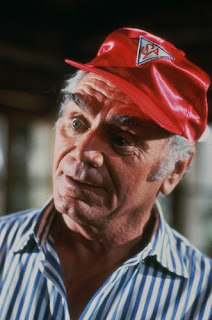 For myself, and I’m sure Eric as well, it was meant to be, rather than not, since the show has been the single most favourite television series of mine since I was 7 years old (I‘m now 24), and one of his as well. To not of had that golden opportunity, to not of met the legend of a man who portrayed the lovable, irreplaceable Dominic Santini (much like Ernie himself, and to quote Don Bellisario, the creator of "AIRWOLF" from his own interview: "Santini IS Ernie Borgnine"), I will whole humbly be saddened and frustrated for a long time that it didn’t materialise; not help but think what it would of been like, and the material we could of got. I hope at the very least though, that the 60 plus cast & crew we will have interviewed by the end of the 2nd, final shoot next April, will have made up for that colossal absence.

On behalf of the "AIRWOLF" documentary team, this post is dedicated in memory of Dominic Santini...and Ernie.

BURTON ARMUS (Writer/Producer: 1st Season)
Ernie was something special. He was never without a smile, a nice thing to say, and a feeling that you were important to him, when actually he was much more important to us. Everyone who knew him was privileged to be touched by him. Over the years since "AIRWOLF", I’ve ran into Ernie from time to time in stores like Costco, the Home Depot (never in Beverly Hills) and it was always the same. A big smile. A friendly hug. A pleasant few moments. I will miss that…I will miss him.

DENNIS DONNELLY (Director: 'Break-In at Santa Paula', 3rd Season):
I first met Ernie at the character boat parade in Newport Bay. The PT boat from the TV show “McHale’s Navy”, was entered by my dad who was Vice President at Universal Television. Years later, I directed Ernie in an episode of "AIRWOLF". What a wonderful man and a wonderful actor.

LOUIS RACE (2nd Assistant Director: 1st Season):
I had the pleasure of working with Ernest Borgnine on a few episodes of "AIRWOLF" in the mid 1980's. Ernie was the consummate pro, full of enthusiasm for his job, his fellow actors, and his crew. He made it a pleasure to come to the set every day. I wish that there were more like him, and I mourn the fact that there is now one less...

WHITEY KRUMM (Special Effects Coordinator: 1st - 3rd Seasons):
Ernie was a very nice guy and I enjoyed working with him on sets. He was always courteous and very professional. I remember one day when I was preparing for a shot at Jetcopters [at Van Nuys Airport] that Ernie, personally, gave me a tour of his pride and joy motor-home, which I greatly appreciated. I've enjoyed the shows that he's been in, "From Here to Eternity" to "AIRWOLF". I was sad to hear of his passing, but happy to know that he lived to 95 years and he enjoyed his work.

ROBERT NELLANS (2nd Assistant Director: 3rd Season):
As the Key Second AD on the 3rd Season of the show, I always enjoyed calling Ernie's home to give him his call time and scene numbers for the next day's work. Some times, Tova [his wife] would answer the phone, and was always cordial and friendly. He always answered the phone in a delightful way, full of energy and vigour. We would have a small exchange, and he always said good night before he hung up the phone. I treated it as a special moment between he and I.

GENE L. GILLETTE (Music Editor: 1st - 3rd Seasons):
"AIRWOLF" was a very difficult show to work on. But for me, the one bright spot was Ernie. One day, we stopped each other on the street, and he said something to me (which I won't repeat) that eased my burden. After I retired, I was staying with my kids in Junction City, Oregon, which happened to be next door to a very good restaurant. At some point, I heard that Ernie was eating next door. I went over and talked with him. It was, as always, a delightful conversation. When I heard about his death, I was saddened. He was a great guy. Too bad the world has so few like him.

RICK SHUSTER (Stunt Pilot: 2nd - 3rd Seasons):
My name is Rick Shuster and I met Ernie on the "AIRWOLF" show. I will always remember him from our first encounter. I was a new pilot working on the show, and I was asked to shut down the Santini Air helicopter after a shot. As I approached the helicopter, Ernie walked over to me and said: “You might want to put on a jacket as it is pretty cold up there". I told him I was just shutting down the helicopter, and thanked him just the same.

At the time I was star struck, and couldn't believe that this larger than life star would take the time to tell me I might want to wear a jacket if I was going to fly. Fast forward many years later, I had worked on many films and TV shows. Working around famous people was nothing new, and I didn't think I could be surprised. So, when I ran into Ernest Borgnine on the “McHale’s Navy” movie in Mexico, on a remote island, I remembered my first encounter with this incredibly nice man, and wanted to tell him that he was one of the nicest actors I had ever met.

Well, he surprised me again. I hadn't had the opportunity to talk to him yet, when a local young island boy walked up to him and asked to have his picture taken with him in front of the helicopter. His reply was: “I thought you'd never ask", and got up from his air conditioned spot in 105 degree heat, walked over to the helicopter, and took a picture with the young local and myself. I still have that picture on my wall today.

When I get asked who I enjoyed working with and who is the nicest actor, Ernest Borgnine is at the top of my list.

We thank the casting director in the sky for Ernest Borgnine.

The first time I met Ernest Borgnine (Ernie) was in a pub; The Greyhound Inn at Aldbury, in Hertfordshire, England. It was in 1967 during a lunch break from filming “The Dirty Dozen“. A fun lunch at the bar with Ernie, who played General Worden in the movie. John Cassavetes, Richard Jaeckel, Donald Sutherland, myself and others, relaxed and told stories & jokes. I was one of the stuntmen on Gerry Crampton’s stunt team for the film.

Ernest Borgnine, a star of the first order, was respected and admired by all on the production. Never late, always had his lines down to a tee, and ready to help anyone. I think I may have had words with him once or twice during the production (like ‘good morning‘) and so on, and that was about it. But, believe it or not, he remembered me. I went on to become a writer and director, and in the Seventies, returned to Hollywood to direct many television shows.

One being "AIRWOLF" in 1984. And who was my star? Ernest Borgnine. He remembered me from ‘67. A few days later, Wendy, my wife, invited him and his super wife Tova, to a dinner party at our house. A dinner with Robert Wagner, Sheldon Leonard and Ernest Borgnine. A night to remember! Great stories back and forth.

I have directed and worked with hundreds of actors, and Ernie was among the tops. He would bend over backwards to help another actor that was having a bad time with a scene.

I remember on one occasion [during filming of the 'Inn at the End of the Road'  episode], an actress kept blowing her lines half way through the scene. I cut four times for her. She was getting into a state, and making it worse for herself. Ernie looked at his watch out of the corner of his eye, then looked at me and winked. It was five minutes from the days end of shooting. I knew what Ernie was going to do. He had done it before when I had directed. I said action. The second speech in was Ernie’s. He blew the line (on purpose) and apologized profusely to all. We broke for the day and went home. Next morning, I said action on the same scene, and the lovely young actress sailed through word perfect. That was Ernest Borgnine. A gentleman respected by all that knew him on and off the set.

He was a man considerate of others. I loved to direct Ernie. I joke there was very little directing to do with him. He was a master at his craft and it showed. God bless you Ernie for being a very small part of my life, and rest well sir. In my next life I may come back as Ernest Borgnine, Robert Wagner, Roger Moore, or Tom Selleck. Four super actors, and wonderful to work with. Just imagine having all four on the same set as a director. A directors dream. 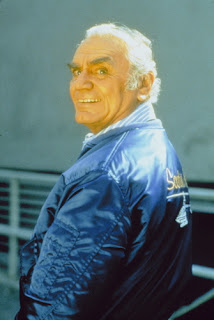